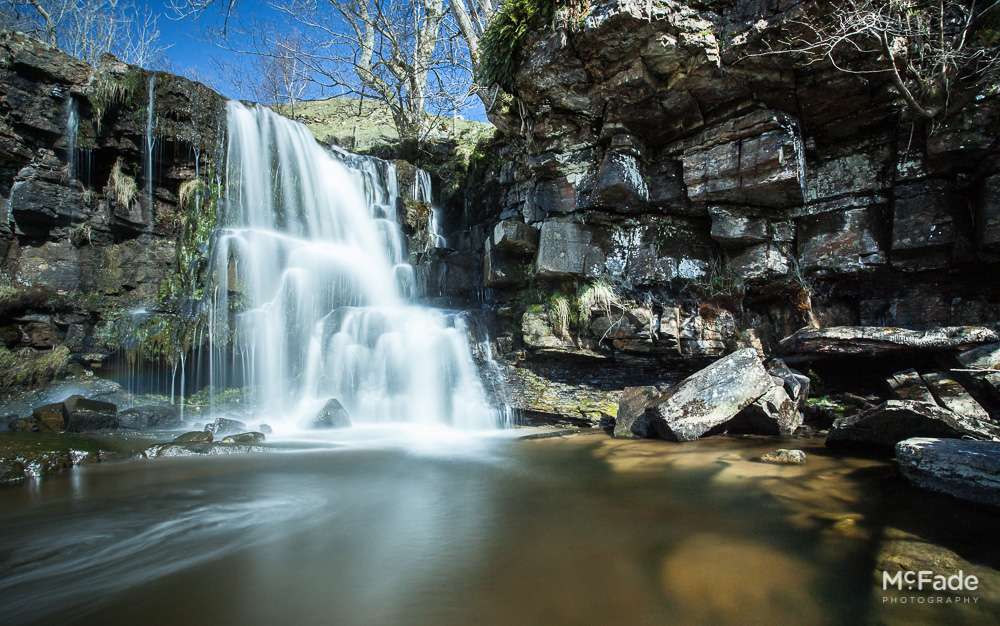 I’d been in Northumberland for a few days and had nothing major planned for the last day, so journey back to Leeds became a 10 hour epic, taking in 5 great Yorkshire Photo Locations, rather than 2 hours down the A1(M).

I’m obsessed with Yorkshire Dales pass roads, the tiny roads which straddle the moors between each of the dales. So when I spotted one linking Teesdale with Arkengarthdale, I struck a path from the A1 at Durham to Barnard Castle in Teesdale. Technically I only skirted Weardale, the dale the Wear river flows through – and didn’t really get any photos there, unless Raby Castle is in Weardale? That was an unexpected treat actually – it’s a very intact looking building, the kind of look from those Crusader era movies. From there I carried on to Teesdale, stopping in Barnard Castle to capture Egglestone Abbey – a small ruin high above the tees. Its free to enter and park, so worth a quick visit if you’re passing on the near by A66. From there you can get a view across to the Bowes Museum, which must have been transplanted from france – looks like a chateau, not a museum!

So to find the new pass – the one linking Barnard Castle to Reeth. Happily, it is sign posted on the A66, so pulled off and set off up the narrow, twisty road – stopping at a ravine with a high bridge in. For a tiny, inconsequential road, it’s a hell of a structure, at least 60, if not 100 feet above the stream below. Very hard to get a clean shot of the bridge from the river banks due to trees… so got a few narrow angle shots. Also, there’s a weir with fish counter about 100 yards upstream.

So off up the hill, the road starts to get steeper till you get to some proper hair-pin bends which get you above the tree line – well to a place where they farm fir trees. They’d been harvested recently, leaving a desolate landscape in their wake. Once over the pass, you’re gradually lowered into the best-named dale… Arkengarthdale. It’s a steep sided offshoot of Swaledale with a little village at the foot of the pass. Very dramatic stuff to drive through. Turning right you have an 8-mile trip to Tan Hill, the highest pub in the land at over 1700 feet up. The road there is steep at first, then very flat when you hit the top – the most surreal part looking across to the right to see trucks and cars flying past on the distant A66. I stopped for a few shots with the 70-200 when seeing sheep, but other than that, it’s a bit of a photo-op-free few miles.

Then at Tan Hill take the road to keld, this is your trip into Swaledale.

On the way down I found a waterfall from a previous trip and used the 10-stop ND filter to create some smooth water shots – then went walking downstream, via a bog which soaked my leg upto the knee when I sank. Found another waterfall with lovely bowl like surroundings. At the foot of the Tan Hill road, turn left towards Keld. There are loads of great views on the way – pull over, shoot, carry on. I popped into Keld to check out some waterfalls I’d heard of. This was lovely – about 1/4 mile out of the village and you’re there – though you’ve a steep path to navigate. It was incredibly bright so was far from ideal, but with a 10-stop filter and polariser, managed to get about 5 shots of each waterfall. Some nice bubble circles too, a bonus of long exposures.

Once into Swaledale proper, you go through Thwaite and Muker on your way west. If you’re into passes, there’s a great one just after Muker which has the steepest ascent of all the passes – with stupidly severe switch backs before it mellows out. Towards the top of this, you are greeted with a beautiful grey cliff to the right of a ravine – one of the grandest scenes in the dale. Then you’re over the top and enter….

It’s a long drop down into Askrig, and the hills around you change constantly – the one on the left start off looking very stepped before you see it change completely as you get towards the bottom of the valley. The views up Wensleydale are amazing.

At this point hunger was winning, so over to Hawes for fish and chips, which never fail to impress.

Now to probably the highest pass in the dales, going from Hawes to Buckden, via Oughtershaw. it’s a long, desolate run with a steep ascent from the foot in Gayle. Gayle is worth a stop, it’s got 2 lovely waterfalls and a ford going through the top of the village.

As you steeply rise up the side of the hill, Wensleydale disappears and you quickly hit the summit. There’s a broken wall on either side of the road. Pause here, get out and have a look around – you’ll see Ingleborough looming large, and deep in a hollow, Semerwater, Yorkshire’s largest lake looking like a puddle in the distance.

By this stage, I was fading photographically, 10AM start and it was now 6PM – so other than the odd pit stop to capture the delightful Kettlewell and a few barns on the way. Wharfdale is an enigma. It is stunningly beautiful, yet elusive to capture. I’ve driven through it, stopped and walked along paths, down to the river, and have yet to find that “wow” shot. You have Kilnsey Crag of course, that’s impressive with it’s ever-dark overhanging cliff. The wharf is shallow and fast running, with pebbles abound, and bridges offering themselves as focal points. I’m sure there will be a place to get the ideal view and will keep going back over and over till I find it.

When you hit Grassington, you can choose to follow the Wharf through Burnsall or head off over to Skipton and Airedale. I went the former, the lower Wharfdale is a different beast to the upper – wide and grassy, Simon’s Seat looking over it, Bolton Abbey and Burnsall both look amazing towards dusk. Stopping again to get a few shots of the valley and its long shadows. There’s a weird viaduct/aqueduct which pops up now and then – I spotted this and Captured the last shots of the trip…

So there you go – a 2ish hour blast down the A1M to Leeds, or a 10 hour epic detour through the hills and dales of Yorkshire… the choice is yours, and if its a half decent day, take the latter – you’ll not regret it!